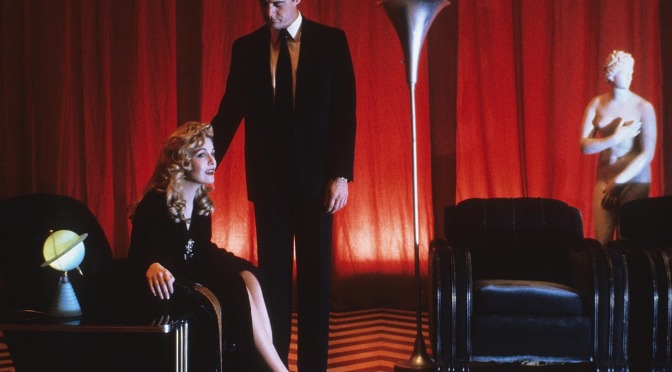 To capture the town of Twin Peaks on the big screen is no small feat. Meticulous planning and light, cautious treading allows Twin Peaks: Fire Walk with Me to create a prequel to the David Lynch and Mark Frost television series with relatively sound results. After slowly pacing myself through two series of television that range from “superb” to “fine”, the film had filled me with a mixture of hope and hesitancy. Capturing the oddities and eccentricities would be no issue for Lynch and his capable cast, but making use of his time and engaging with this new format would inevitably lead to differing results. Twin Peaks works well in those forty-five-minute chunks of time. It works just as well here, but the scope and mood differ slightly.

Here, Lynch is at arguably his best, regarding both direction and performance. His framing and shot composition are in the forefront far more than his other projects would allow. The already established characters are not enough for him, introducing the occasional new character keeps a solidified pool of recurring eccentrics fresh. Even the brief, fleeting appearance from David Bowie or the plot-driven moments with Harry Dean Stanton do more to enliven this world than anything Lynch could have hoped for without them. These punches of fresh, invigorating air pave the way to fruitful conversations between a largely returning cast, most of who make the leap from television to film with relative ease.

As an audience, we’re given far more detail as to who these characters were before the death of Laura Palmer (Sheryl Lee) shook them irreversibly. Lee takes centre stage for good chunks of the film, adding depth and detail to her character, a depth that was simply never possible on the show. With so many narrative strands to worry about, Palmer was the catalyst for two seasons of great entertainment. To receive extra detail behind such a core of the show is a great experience, Twin Peaks: Fire Walk with Me can at least add an abundance of background details that will make a rewatch of the show that much more interesting.

But that is the real beauty of Twin Peaks: Fire Walk with Me, isn’t it? It is possible to watch the show without the film, but the film without the show would prove rather troublesome. As endearingly confusing as the series that preceded it, Twin Peaks: Fire Walk with Me offers odd bits of enlightenment and charm, with Lynch weaving thick and layered themes into a narrative that has more than a handful of dissonant moments. That seems to be the draw of Twin Peaks, and to some degree it is endearing enough to work in the feature film format. Likeable, and a good bit of entertainment that will set the foundation for a series rightly regarded as an intense monument of unique art. At least so much of that is identifiable, and wholly engaging.