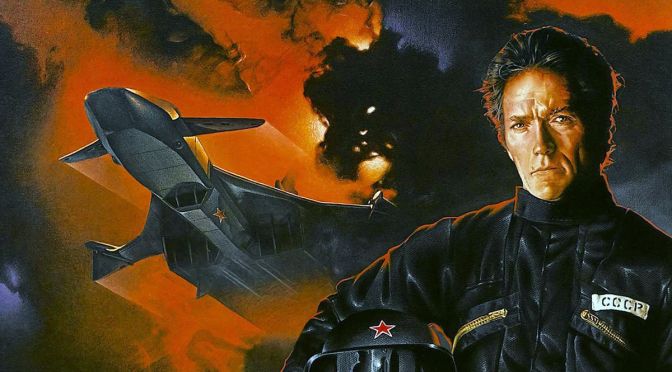 Had there been any doubt about the strength of Clint Eastwood as a leading man as his career broke on through to the 1980s, Firefox puts to rest the notion that he was losing his grip on the leading man archetype. He sprints his way through a cabin, faster than a helicopter, the collected nature of a man fearing for his life as he grips a shotgun tightly. Hazy flashbacks to complete annihilation and what Eastwood’s Mitchell Gant had been through in the war take up most of the backstory time. Rightly so. What a horrible life of mistreatment he has led. Another war hero, this time fictional, for Eastwood to embody and control through another two hours of action-heavy machoism’s that demonstrate his later efforts at encapsulating the senseless bravery of the military.

But with a thick sheen of eighties misery to it, Firefox gets off on the right foot. Stealth fighters, the Cold War, Nigel Hawthorne, what more could you want from Eastwood? He settles himself into the directing chair once more, this time with a pastiche of confident cuts and remarkable, effective pieces of composed weakness found deep within Gant. He is a man with a breaking point. The ordinary hero that Eastwood so frequently desires for his films is encapsulated by this former Air Force hero. Eastwood adapts the effects of PTSD surprisingly well, the blades of a chopper and the sight of a gunship throwing his mind back to his days as a serving military man. These moments are handled with an incredible understanding of what it means for the leading character, who will naturally save the day. He feels wounded from the start. It is easier to inflict our emotions on him when we see him struggle so soon.

Eastwood’s natural abilities in front of the camera are mirrored behind it. In his direction, he finally feels comfortable. Essential it may be that he gets to grips with the action genre so rapidly, he does so with gusto and an enjoyable backdrop of locations. Cabins in decent isolation are soon traded off for espionage in England. It is here that Firefox flags up a few problems. It wishes to drift toward the James Bond farce, with fake moustaches, intercepting intelligence and passing under the nose of the enemy. It makes sense for the period, with the Cold War frustrations and the politically fought war, but for Firefox, it makes for some frankly strange moments that never quite recover themselves.

An absolute goldmine for those wanting a feature where Hawthorne sticks to a Russian accent with brave, unwavering professionalism, but Firefox isn’t great for much else. Sloppy action and limp characters pave the way in this one. Distressing too, since Eastwood works hard to gain the trust of his audience in the opening moments. He does so and dispenses little of merit in the most climactic of moments. It is still fun, but it is agony to think of what could have been. A bearded Eastwood talking through the rookies that believe they know better. It is a classic tale that sees a legend of the screen perform at the best of his abilities. That much is thoroughly enjoyable, but it feels irrelevant, albeit some of the finest character work Eastwood has provided in decades.

"Who is the happier man, he who has braved the storm of life and lived or he who has stayed securely on shore and merely existed?” – H.S.T.